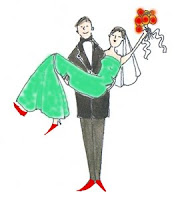 Thanks for all your advice and your thoughts regarding the Wedding Dilemma!  I really appreciate it and it means alot to me!  Is really nice to hear other people's opinion!

So continuing on, my good friend and blogger Emily commented and gave the short version to the story:

"Venti probably didn't ever really want to ask either of his brothers to be included at all, beat around the bush, jumped to his (preferred) conclusion that Grande wouldn't want to do it anyway, and used it as a pass to do what he actually wanted to do. When Java brought all of this up, he was mad because he has no intention of changing anything at all, not because he intends on "demoting" a friend from the bestman/groomsmen role".

That's exactly how it unfoled.  Mother's Day was spent at my parent's house.  Venti and I didn't exchange any words the whole day.

Later that night, Grande came in my room to say goodnight and we were talking about what was going on and Grande says, "I wish Venti would have asked me to be best man the same way he asked Tall!"

"He came downstairs today when we were playing video games and just came right out and asked him"...Grande said.

So it turns out that he is having both Grande and Tall.

By the next morning I couldn't stand it any longer and I knew I had to talk to him about this.  Most of the time I'm better at putting my thoughts into words and so I sent Venti an email...even though he was downstairs...lol:

I wanted to send you an email because I wanted to be able to tell you my thoughts.  I was upset at the way you talked to me the other day and I'm able to look over that, but what really has me upset is the fact that you didn't even bother to get me something for Mother's Day.
Dad said you said that I told you not too.....I didn't....I remember telling you that regarding our Anniversary but never was the subject brought up for Mother's Day.
Even if I would have told you that (which I didn't), wouldn't you still say to yourself, "all that my Mom does for me throughout the year, I want to show her that I appreciate her?"

It isn't how much you spend...its the thought...I don't care if its $5....its just the fact that you didn't acknowledged me on Mother's Day and you hurt my feelings. 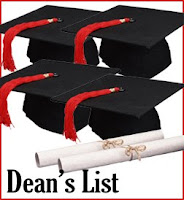 As far as Mother's Day goes, you told me not to get you anything for your birthday because no one has money.  I really do appreciate everything you do for me I just felt like I was being forced into a decision.  Well anyway my choice was made, Grande and Tall are my best men.  I'd rather have them be my best men than deal with all the consequences and I do not need to be any more stressed out than I am.  I have a lot of things on my plate right now and this did not help out at all.  I am sorry for the things I said.  By the way, I am going to be on dean's list again.

I did not tell you not to get me anything for my birthday....everyone did get me something.  I told you back in April not to get us something for our Anniversary.  Never was Mother's Day ever an issue and even if I did say that, wouldn't you think to get something small just to acknowledge it?  Like I said, it's not what you spend, its the thought.

Tall told me last night that he is honored that you asked him....Grande said that he wished you would have asked him the same way you asked Tall.  I think you were hoping he would say no.  They are both excited about it and they are not taking the role lightly.

You have alot of things going on and so do we.  I don't want either of us stressed out....this should be a happy time.

Congratulation on Dean's List....we are very proud of you!

After that Venti came upstairs and gave me a hug and we both said we were sorry.

Things have been back to normal since.

Turns out the 2 friends that he originally was going to ask as his best men aren't even coming to his graduation party this Sunday.

I don't know if he ever actually asked them or not....