Its official.  Venti is moving!  As you know he graduates next month from Penn State.  We was offered a position at 5 different companies which was really good considering that his roommate that is also a Civil Engineer didn't get any job offers!  3 of the offers were for companies around the area we live in, 1 was in Delaware and the other one was in Maryland.  He really, really wanted the job in Maryland....and he got it...which means he has to move....to another state.  Its only 80 miles but its still another state!
So now he has to scramble and find an apartment.  He graduates May 14th and starts his job June 7th!  Not much time!   And now Mocha wants to quit her job and move down there when him!  Not sure if that is a good idea or not.  Jobs are hard to come by and I don't want him to have the burden of all the bills.   She would be moving there in October any how when they get married.  I am happy for the fact that he wouldn't be alone if she moved too.
On Saturday we are going apartment hunting with them!  That should be interesting!  I'll let you know how that goes!  They have 7 apartment to look at in one day.  I just hope they find one they like so that he can check that off the list!

I spent most of the evening stuffing and addressing his graduation announcements. 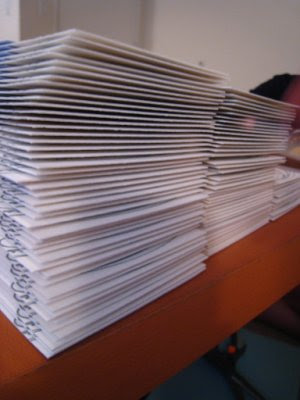 One month from today...he is graduating.