Shorts birthday was yesterday and he wanted to take 3 friends for pizza and a movie.  How hard can that be?  Piece of cake!   The Mom's dropped the boys off at our house at 1:30pm.  We get to the pizza place, place our order and sit down.

Then the fun began.

Self serve sodas apparently means taking your cup down the line of selections so you can sample some of each in ONE cup.

Putting garlic, peppers and cheese on your pizza until you can't see what the pizza looked like to begin with...and then asking for another slice because you don't like it (not!).

Using your one finger to eat your pizza....that consists of poking your finger into your pizza and swooshing it around...getting as much sauce and cheese on your finger and then eating it.

Wooden chairs are apparently the best playing field for farts. 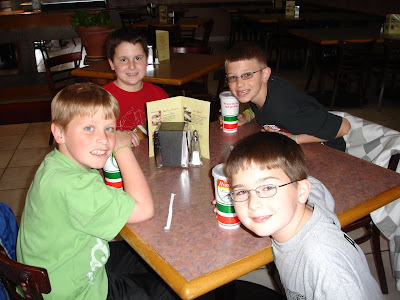 Can't your just see the mischief on their faces?

Short was not doing any of these (honestly he wasn't). My boys know to behave!

After an hour of torture, we get in the car to drive to the movie theater.

Short wanted to see, "Diary of a Whimpy Kid."

We got their early.  Like 40 minutes early.  The other movie hadn't even left out yet.
We had to entertain them by taking pictures of them with Shrek. 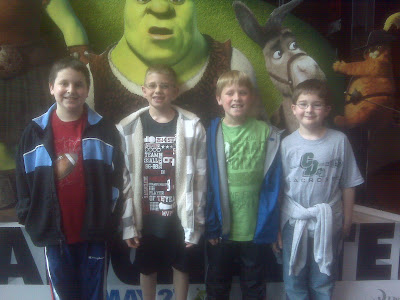 Since we were so early, we got first choice of seats.

So we choose the very back row.

Hardly anyone came if after us.

The movie was just starting and in walks a group of 4.

And they chose the row right in front of us.

Apparently the boys were less then thrilled about this.

And apparently these people didn't like when the boys laughed, or chewed or took a drink or opened a wrapper.

They told them to be quite several times.  I didn't know until after the movie because we left a seat in between us and the boys and didn't realize everything that was going on.  We were only 1 seat away from the boys and I didn't see or hear anything out of the ordinary from the boys!

So why would you come in at the start of a movie and sit directly in front of someone else when you have the entire theatre to pick from and then get annoyed when four 10 year olds in back of you laugh?

After the movies the boys told us all about this on the way home.  Had I wished I knew this because I would have said something to them!  I'm sure we all have a movie theater story to share (feel free to tell).

The movie was funny...they really enjoyed it...minus the discruntle people in front of them!
Posted by Java at 8:36 AM