Being a Mom of 4 boys is really rather interesting. Plus I have 2 sisters and all girl cousins so I grew up not knowing a whole lot about the male species. Things that I have seen over the years sometimes puzzle me and often times gross me out!

I am particular about bed making...I simply cannot walk past a bed without making it...so every morning after I wake up Short, I venture into Tall's room because he never makes his bed and it only takes a couple of minutes to throw the covers on and fluff the pillow.

Well yesterday I was making his bed and I walked around to the other side and there was the t-shirt again. 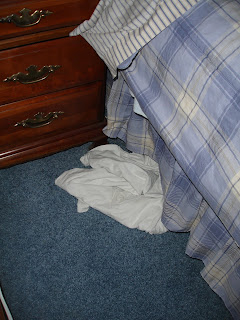 This time when I reached down, my hand got a hold of something...well ummmm....dried and crusted!!?? Ewwwwww...so I picked it up...touching as little of the t-shirt as possible....holding it up to the light (yes I really did that)...omg...Nooooooooooo...not my little boy (almost 17)...but still little in my mind!

So I decided to investigate alittle further even though I could hardly control myself...I stooped down and lifted up his bed skirt and found this: 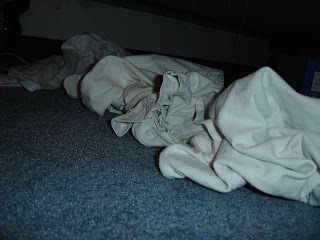 A sea of white t-shirts! Is this really something teenage boys do?? Yes of course they do, but not my son! Venti never had t-shirts laying around...neither did Grande....what happened to tissues or in the shower?? Or never at all?? I know he is a normal teenager...but couldn't he at least throw them in the laundry so I wouldn't see them??