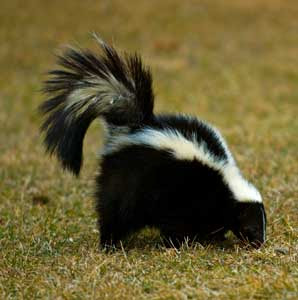 That's what my house smells like right now! I woke up last night to the most awful smell ever! A Skunk!! I thought he was at the foot of my bed and had just let loose his skunky skunk! I swear I woke up and saw clouds of skunky smoke! I even had to sleep with the covers over my nose! He's out there somewhere really close...like maybe even under my back porch or something! When I came home from work tonight I had forgotten about it...that is until I opened the door and it smelled like there were 10 Beauticians giving perms in my kitchen! It smells that bad!

I had remembered a tip for when one of my sons burnt a bag of popcorn in the microwave and the horrible smell that it left. You take coffee grounds in a bowl...add water (make sure you use enough water that the grounds don't dry up), mircrowave the grounds for 2 minutes (longer if necessary). I tried that and it did work...at least I think so! You know how when you smell something bad you can still smell it later?? Well I still think I smell it! If you have any tips to get rid of it, please let me know!!

Venti is coming home for the weekend, so that means cook..cook and more cooking! Little does he know that Joe took Saturday off and we are going out for dinner! Woohoo! Joe is switching to night shift starting next week. He was on night shift back in September and then switched to 1pm-9:30pm and he feels like he is missing out on the whole day and with Summer coming he doesn't want to work that shift...so back to night shift it is. That means keeping the boys quite all morning while he sleeps...not an easy task!

Tall turn 17 on Saturday! I can't believe it! He doesn't even have his drivers license yet! He got his permit last March and didn't even get to drive when he fell playing basketball and broke his wrist. 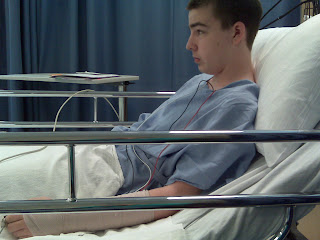 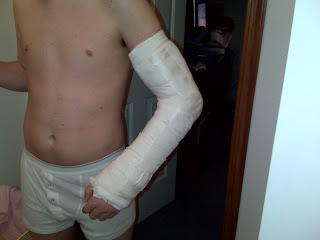 Ozzie cuddling up to Tall: 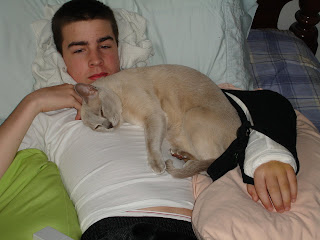 He had to have surgery and now has pins in his wrist. He was in a cast until July and then physical therapy after that. He drove twice in September and then the weather got bad and he hasn't driven since! We told him to let us know when he wants to drive. He obviously isn't ready to or he would ask! He was very nervous the 2 times he went so its probably better that he waits until he really wants to drive...plus we already have 4 of us on our car insurance which is practically as much as our mortgage! :)

Short is having a sleepover tonight..just one boy but it sounds like 15 of them downstairs...I am not a fan of sleepovers!

And why isn't Survivor on?? Who likes basketball anyway? :)
Posted by Java at 8:40 PM