My house is a sea of blue...with 5 males and me in this house pink is a color that isn't seen too often..and when it does it sticks out...so the other day I was out shopping and getting a few new things for our recently remodeled bathrooms and there on a table in the middle of the floor stood a mountain of beautiful pink, fluffy towels!! I walked over to them...my hand brushing against the softness of these solid pink bath towels! I thought I would treat myself to one of the beautiful pink towels! After all they boys have plenty of towels for them! I took it home...washed it and put it under the sink..all ready for me to use.
Well we have a weird bathroom sharing situation in this house...Joe and Venti shower in the master bathroom and me and the rest of the boys use the bathroom in the hallway (I know..its strange)...so imagine the look of horror later on that night when I sat down on the toilet and looked straight ahead and saw this... 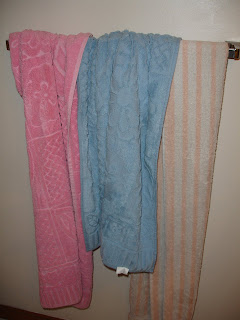 My pink towel!!! Which one could have looked and found my beautiful pink towel and USED IT?????? Grande was the first one I asked because he was in his room and BINGO!! He said that he used it because it was nice and soft!!! I said, "didn't the color pink make you think that it was MY towel?? He said no..that he had no idea!!

So I take my lovely pink towel...wash it..fold it and place it nicely back under the sink for ME!!

Imagine what thoughts went through my head when a couple of days later I saw this: 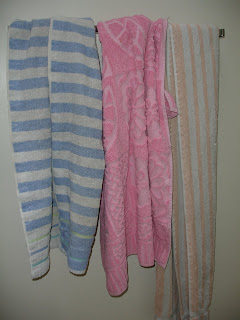 Someone took my towel!!

I haven't even had a chance to use it yet!! (yes I showered but didn't use MY pink towel).

Found out this time that it was Tall!! He said that it is nice and soft and couldn't understand why he couldn't use it! Mind you we have TONS of other towels in this house but they all want the one and only PINK towel that I bought for myself!!