We just joined a fitness club on Sunday. They were having a one month special for a family for $40! What a great deal huh? Plus the main reason we wanted to join there was because they have a large pool with a curvy slide AND a lap pool. As you know, Short has a bit of a weight issue and he loves to swim so what better exercise in the middle of winter then swimming! Plus I thought we could all use some exercise...including me!!! 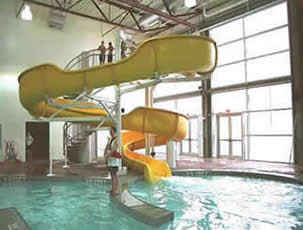 Well yesterday myself, Joe, Grande & Short decided to go after dinner for an hour to try it out.....when we got there they were having water aerobics in 2 of the 6 lane lap pool. I decided to grab the first lane as it was empty. Up and down I went...doggy paddle...leg lifts...but never going under. I wouldn't want to get my hair wet now would I? After all its not like I'm in the pool or anything!! Well we had a great time...Short loved the slide...Grande did several laps in my lane and said that he feels out of shape! He is 19 and feels out of shape?? I didn't feel so bad when I got home and realized that every muscle in my body hurt!

So then comes tonight. Joe and Tall were working and Grande didn't want to go. So Short and I get in the car and head over. When we got there the water aerobics was being held in the leisure pool so the entire lap pool was free except for 1 or 2 lanes. 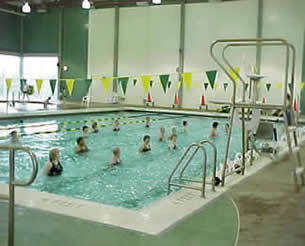 I decided to get into lane 3 because it was open. I got in from the side. Little did I know that the dividers between the lanes were super heavy which meant that you had to go UNDER water to get to the next lane...and then the next...and then to the ladder. The sides are way too tall to lift yourself out...so I realized that I was stuck in there....in the middle of the lap pool! Not wanting to get my hair wet! I'm such a girlie girl! When I go swimming I don't go under! So there I was...doing my laps and the whole time wondering how I was going to get out of there. Short was busy on the slide the whole time and finally came over to me after an hour. I said, "can you lift the rope enough for me to go under without getting my hair wet?"....well poor Short lifted with all his might and the rope only lifted about 2 inches!! OMG...I'm stuck here in the pool! Glancing over at the clock and noticing that it was inching towards the time when we had to leave to pick up Tall! I contemplate this and boy did I contemplate....I know you are thinking whats the big deal...just go under and get out...but I can't!!! Well time got the best of me and I knew we had to leave...I said to Short, "lift up as high as you can and I'll go under"....one...two...three....and he lifts...and I go under....and I come up...and I'm all wet except the very top of my head!! Now realizing that I have 2 more lane to go under! Ugh! Standing in the 2nd lane a Michael Phelps wanna be is barreling down the lane at us...I didn't have alot of time to think about it and so Short lifts again...and under I go...well by the time I got to the ladder I looked like a drowned rat! Stop laughing! I know your getting a visual!! That was traumatizing! lol...I was so worried about my hair that I didn't realize how much I worked my body! Oh the pain! lol..

So here is my hair after it dried on the way home...time to hit the shower!! 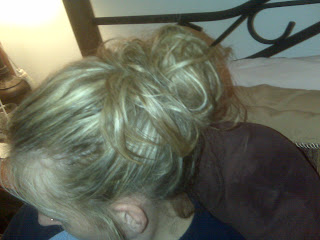