What's Wrong With Our House?

Venti and Mocha have been coming home almost every weekend.  They have to bring their new puppy home and so they have been staying at Mocha's sister's house because she got a puppy out of the same litter.

Venti took Short to his basketball game on Saturday because I had to work and Joe was sleeping (he works nights)....he took Short to the game, came in and picked up his mail and out the door he went.  I didn't get to see him....neither did Joe.  I asked Short if Venti said anything about stopping back over and Short said that yes, Venti said they would come by either later that night or Sunday.

Sunday night Venti calls.  They were already back home!

They never stopped by!

I said, "I bet you saw Mocha's family didn't you?"

Hmmmmm....the longer they are married the less we see of him...and of her.

Is that how it is?  Do your kids not come around anymore after they get married?

They make time to see her parents...but not us...

Her parents live less then 5 minutes from our house!!

I guess this quote really is true....


"A son is a son till he takes a wife, a daughter's a daughter the rest of her life" 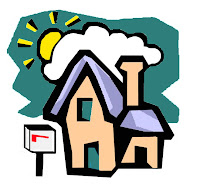