In case you missed it....start HERE.

So my boss drives up to go out to lunch and we decide on Olive Garden because it was cold and we were both in the soup mood!

I told her that I would drive and we get in the car and you can tell that she was a little nervous....image that...having your boss nervous at you!

The restaurant was less then 10 minutes away and we talked the whole way there....but not one word was said about work.

She told me my hair looked really pretty and that she liked my shirt.....hmmm...she was trying...

When we got to the restaurant, there was a 5-10 minute wait for a table so we sit down and our conversation was still about everything but work.

Our buzzer goes off and we are escorted to a table.  Drinks are ordered and my boss reaches in her bag and pulls out a folder....here we go... 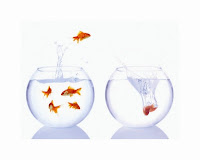 She asks me why I want to leave and I tell her that you can't beat the State's pension plan...she says that they have a great 401K plan..I said that pension and 401k's are 2 different things...she agreed.

She then asks me what other reasons I have and I told her about advancements, stability, the ability to bid on other jobs, etc.....

She then started talking...and talking...and it was then that I kinda drifted off and wasn't even really paying attention to her...not to be disrespectful but because I realized then that I wasn't interested in what she had to say...I knew then...at that moment that my decision to leave was the decision that I was going to stick with.  I felt good...confident...excited that it finally came to me that my choice was the right one and no lunch...no extra week of vacation...no salary increase would change my mind.

She told me to think about it overnight and call her in the morning.  She thanked me for meeting with her and for considering her offer.

Wednesday morning she called me before I even had a chance to call her.

I thanked her for the opportunity and said that I was sticking with my decision to leave.  You could hear the sigh escape from her mouth.  I told her that it was nothing personal and that I appreciate everything she has done for me.  She said that she understood and said that I will do great no matter where I go and that it is a great opportunity.

I then told her that I would help out on Saturday's and help train my replacement if she wanted me to.  She said, "you would do that?"....I said yes and she thanked me and said that would be a great help and that she really appreciated it.  She said she would put an ad in the paper and asked if I would help in the interview process.  I told her I would and said that I wanted to make the transition easy for her.  She thanked me several times and I was happy that I was able to help her out.

When I got off the phone, my employee Kate started crying.  It is just her and I that work at the store.  She was sad that I was leaving and was hoping that I would change my mind.  The rest of the day she was very quite and hardly talked.  I told her that we can't work like that for another week & 1/2 and she said that she is afraid that whoever replaces me she won't like.  I told her that she could help pick the person with me.

So I feel like a weight has been lifted off my shoulders.  I am happy about my decision and looking forward to my new job.

Thank you all for your advice...it helped me immensely!


"You have a choice: to plow new ground or let the weeds grow."