The job offer!!  If you remember back in December I had a job INTERVIEW.....well they called yesterday and offered me the job!!

So now I have a decision to make.  I don't dislike the job that I have now but I am a store manager which comes with a lot of responsibilities and stress which is why I left my last job!  I have goals I have to meet, meetings to attend and budgets to keep.  I didn't start as the store manager and was just promoted in October after being there for 3 months because the other manger quit.  I currently work for a beauty supply distributor which is the field that I have an interest in since I have my cosmetology license.  The new job is working for the Dept. of Revenue in the personal taxes department...working at a computer...which I love the computer!  Parking is an issue and would cost $145 a month.  The salary is pretty much the same for both jobs so I don't have to factor that in. 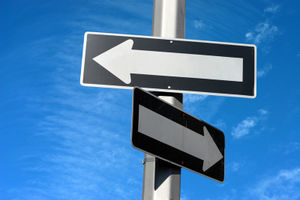 The future is probably better at the Dept. of Revenue but I have so much flexibility where I work now.  If I want to come home for lunch I can...or pick Short up at school or run an errand...but I won't be able to do that at the new job....but there is way more room for advancement at the new job and none at the job I am at.

What to do...what to do....I accepted the new job because they don't want me to start until February 7th so I have time to really think about it.   I wouldn't have to give my notice until January 24th.
I just don't want to make the wrong decision!

How does one decide??  I know some people make a list and I tried that...but it was equal.