Do you ever have a day that you wish you could just start over?  Well yesterday was that day for me.  I was leaving work and was in my car heading out of the parking garage that I park in...the same one that I have come and go for over 7 months now...I swiped my card...the gate lifted...I drove just a couple of feet...turned the wheel to go down the ramp...and BAM!!!   Smack went the back side of my car into the wall because I obviously cut it too close.  My heart sank!  I didn't know what to do.  I was afraid to pull over and look at it because by the way it sounded it had to be bad!  The whole way home I kept trying to look in the side mirror to see if I could see anything but I couldn't!  I cried the whole way home.  My car is only a year old and only has 8000 miles on it!

When I got home, Joe and Short were next door at my parents swimming so I got out of the car and crept around to the side.  Gulp!  It looked like someone side swiped me!  There was paint missing and a couple of small dents plus some big dents!  I had to tell Joe and I didn't want it to look like it was something I did......sooooooooo...I called him on his cell phone and said, "Joe, someone in the garage hit my car!".   "What!?"  "Someone hit the side of my car!"   "I'll be right up!"

So Joe gets out the scratch stuff anyhow and while he's rubbing it on the dents and scratches, the dust from the concrete wall falls off and I couldn't believe he didn't see that!  I was holding my breath the whole time.  He finishes and it looks a little better but it is definitely noticeable.  "Well this sucks....how much is our deductible?"  "$500"  "That's just great."  "Joe I feel terrible...I need to get out of that garage!"  "Yes you do!  Don't worry about it...its just a car!"  "I know, but I feel terrible about it."

So Joe goes back down to my parents house and I go inside...feeling bad because I did that to the car and feeling even worse that I lied to Joe!  He is a very understanding man and he would have understood if I would have just told him the truth but somehow it just seems easier to blame it on someone else!  I sat on the couch and held a lengthy conversation to God asking for forgiveness and telling him that there are worse crimes in the world and so maybe he could focus on them and not me! 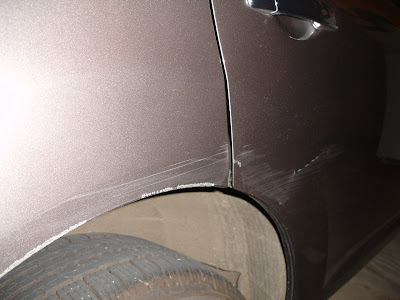 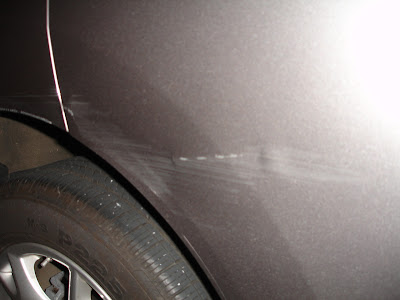 I haven't been able to post for a while because where we live just experienced a severe flood!  All from the remnants of Hurricane Lee.  If you want to see some pictures, click HERE.  I live right around all of this flooding and luckily we didn't have any ourselves.  My in-laws had 2 feet of water in their basement.  My boss had water in her house that came up to 6 inches from her 2nd floor.  She found out yesterday that it is condemned and only had $50,000 flood insurance.  So sad.  I was called off of work last Thursday and Friday because I work in downtown Harrisburg which is only a few streets away from the Susquehanna River that crested at 27 feet and it is normally at 7-8 feet. My city had lots of damage and so many people have lost their homes and/or had damage. Please say a prayer for those that were impacted by the flood.  Some of you may have heard about us on the news!  Our boil water advisory was just lifted and we were happy about that!

Some of you will be happy to hear that FOLLOW FRIDAY will begin again on September 23rd!!  That is NEXT Friday!!!  I have missed it just as much as you have and I'm anxious to "see" everyone again and hopefully some new faces!  Hope to see you there!
Posted by Java at 10:29 PM