Of Summer is almost here.  Summer is my favorite time of the year and I always get a little down when its over.  Even though Fall is nice, we all know what comes after....Winter!  Blah!  Okay...enough of that subject!

I have been busy, busy, busy!  One would think that since our household has gone from 6 to 3 that I would have all the time in the world!  But no....taking Grande and Tall to college last Thursday was really hard.  They are in different buildings (same college) and so Joe and I had to run back and forth getting them all set up.  Then we ran to Walmart to pick up some things that they needed...only $100 later!  Prior to that we spend several hundred on "things"....Boy is it ever expensive getting your child ready for college!  Its like setting up an apartment!  And I had 2 at the same time!  I'm sure I'm not the only one and for those that do....you have my sympathy!  From cable wires, to nail clippers!  I think they have pretty much they need...at least for now.  Grande was super excited to go and he was mentally prepared for it because he went for 2 years at a community college but poor Tall on the other hand was very nervous and wanted to come back home with us but I thought it was best if he stayed so he could get settled in and meet some new friends.  Both of them went to high school with their roommates so I am relieved about that.

We stayed for over 8 hours and then it was time to say goodbye!  Grande practically ushered us out of his room but Tall held on extra tight when I hugged him goodbye.  I didn't cry when I hugged Grande because he clearly could have cared less, but when I was hugging Tall the tears started to fall.  He cried too which made it even harder.  I was so upset by the time I got in the car that I wasn't watching which way Joe was driving and he mistakenly took the highway south instead of north and the next thing you know we were 45 miles the OPPOSITE way and ended up in the next state!  Laugh if you must and yes it is funny now but at the time I couldn't stop yelling at Joe because during the whole 45 miles I kept saying that things didn't look "familiar" and he insisted they did!  I see why I usually do all the driving!  So it took us 3 hours to get home instead of 1!!!

They are coming home tomorrow (Friday) until Monday!  Short is missing them terribly and boy is our house ever quite!  As much as I miss them I am enjoying not having to worry about what to cook for dinner!  With Joe, Short and myself I can make something quick and everyone is happy but when the boys are here I have to make a full 3 course meal!  And wow the laundry!  I have to actually go around and look for things to make a load!  Amazing!  And the dishes!  Hardly any!  And the bathrooms even stay cleaner!  But I would take all of that if I could trade it for going back in time and having all of my boys here and making time stand still......


Grande and Tall at college 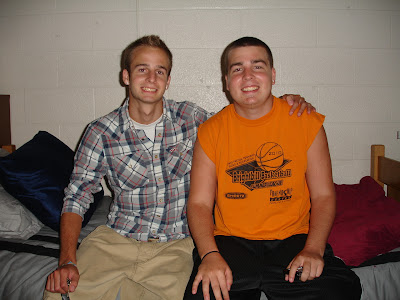 Venti is home (staying at Mocha's parents house) until September 12th when he leaves for San Diego until December 22nd.  After that he is done with the training program and hopefully can stay here or close to here...crossing my fingers!  Their dog Dudley is HUGE.  He is up to 150 lbs!  Here some recent pictures: 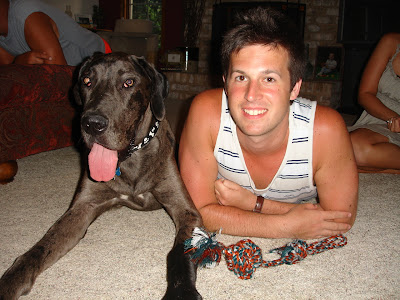 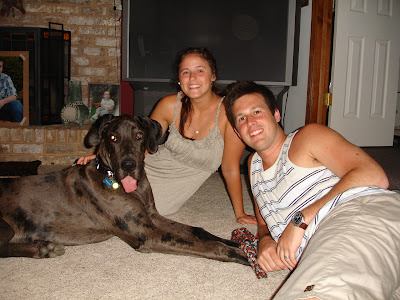 My Dad is slowly doing better!  I looked out the window yesterday and he was walking around in the yard and that is the first time that he has done that.  He still has double vision which bothers him but he said that he is starting to see clearer which I was happy to hear.  Thank you all for your words of wisdom and prayers.  It really meant a lot to me.  I read every single comment and they really brightens day!

We had a visit from Hurricane Irene last week!  She left us with a present of a $150 bill for the shingles that blew off of my roof!  Thanks Irene!

My job is going okay.  My job is considered part-time because from the end of October to the beginning of February I will be working 2 week and then off for 2 weeks.  While that does sound wonderful, I don't think we can afford it!  Especially over the holidays!  How am I going to be able to afford gifts let along paying the bills.  I knew this when I took the job but didn't really think about it.  Plus I will still have to pay for my parking space which is $145.00 a month.  I don't know what I'm going to do!  I really wish I could do something at home and make the same amount of money, but I guess I am dreaming.  I have been looking for another job but haven't found anything.  I wish I had more flexibility too.....sigh....

I will be starting the hops back up!!!  I know you all have been waiting patiently and I do appreciate that!  Give me another week or two and things should all be settled by then!

I hope everyone has a very safe and fun filled Labor Day weekend!
Posted by Java at 10:03 PM